Spirit of the Tribes 10!

I went to Spirit of the Tribes in Ft Lauderdale, FL for Memorial Day weekend. It’s quite a drive from North Alabama. 14-16 hours. The drive was good, though. I drove with some troupe mates so there was a lot of bonding time. And I saw a couple of amusing things such as this

These are so tacky they’re awesome! 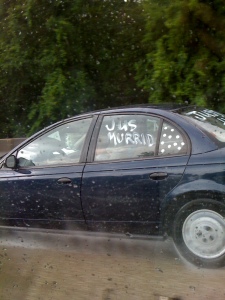 Someone has a thick accent…

It’s been awhile since I’ve been to Florida. It is very hot and humid, but very green and pretty. One thing I forgot though, Florida kind of smells. Not intolerably, but it has a very distinct smell. I think it’s all the swamps.

Anyway, we arrived at Spirit Monday morning after driving the whole previous day and only stopping for about 4 or 5 hours sleep the previous night at a friend’s farm. We arrived just in time for classes to start.

My very first class was with Unmata, who I love! Though I’ve seen them perform many times, this was the first time I actually got to take a workshop with them. It was fun and fast paced. We learned a high speed (of course!) combo that is very different from styles I have done previously. It was a good class, but it is very hard to keep up with Unmata when you’ve only had a few hours sleep! Somehow, I held on and made it through the whole workshop.

Next, I took a Belly Baile combos workshop with my first teacher, Myra Krien. It was really great to be back in her class and I still find it very easy to follow her. Her teaching style and body movements are still so familiar. Belly Baile is not what she taught when I took classes from her. This is her own unique fusion dance style that is a beautiful and artful combination of the various dance forms she has learned over many years. The combos have texture and are very beautiful. She sells a DVD on her website with the combos. I definitely recommend it.

The second day, I took a workshop from Devyani about favorite ATS combos. Their classes are always good. Megha is a very precise teacher. This is the third or fourth workshop I have taken from them. I got some cue subtleties cleared up. The difficult thing for me in ATS workshops at big events like these is there are always a lot of people who are not very familiar with ATS, and it’s a little hard for them to get the combos and ideas. Not that I would discourage beginners from taking the workshops. It’s just hard to work through the exercises when someone in the group doesn’t already know the basic concepts of ATS. I still always learn something, though.

After the Devyani workshop, I took a class in pops, locks, and layering with Kaya. I thought Sadie was supposed to be at the event as well, but for some reason it ended up just being Kaya. This was perhaps my favorite workshop of the event. It was challenging and a great workout. I have never gotten such a focused oblique workout. That night and the next day, my obliques were very sore.  Just the obliques, not all my abs. Not any other part of my body. Just the sides of my torso. So, the drills really isolated the obliques. Kaya told me twice during the workshop that I was doing a good job. It was one of the highlights of my trip!

The last day of the event, I took a workshop on Romani Gypsy style with Artemis Mourat. This was my second workshop with her. I love the Romani Style. It is actually not really intended to be performed, but is just the dance of the people. It’s less flashy than some other styles. Artemis said on a scale of intensity, if Oriental belly dance is a 10, Romani Gypsy style is a 6. She said she thinks people should be careful when saying they are doing a “Gypsy” belly dance piece if they’ve never actually learned anything about real Gypsy dance. She said, just because you have a big skirt doesn’t make it authentic. You could call it your Gypsy-inspired piece, but learn about the real style before you call it a Gypsy dance. I love Artemis and her workshops, but I still feel oh so white when I try to dance like her.

Finally, my last class was with Dalia Carella, who is just delightful. The class was an El Mundo fusion dance class. It was a very fun style with a lot of Latin influence. Lots of sassy skirt work. The dancing was flirty and spicy.  It brought me visions of life in the tropics and made me wish I lived in a culture that danced more.  It was a perfect end to my Spirit workshop experience.

There was a great vending area of course. I didn’t buy anything. The one costume piece I was looking for was a skirt to wear with my bedlah for Oriental belly dance. A fusion festival is apparently not the place to find a bunch of those.

There was a show every night. It was a showcase of various levels of skill and styles from all over. Some of my favorite performances were by Anasma, Beat Box Guitar, Danyavaad, Nanda Najla, and Shakra Dance Company. The shows were full and entertaining. They were also expensive. $35 per show. If I hadn’t been working at my dance teacher’s vending booth in exchange for tickets to the shows, I wouldn’t have gone to every one. I would rather spend more money on workshops, which were actually cheaper than the shows.

My troupe performed Sunday night. We closed the show. The performance went well. The Sunday night audience was smaller than Friday and Saturday, but it was a good crowd. I didn’t like that there was no outside photography or video. So if you want pictures or video of your performance, you have to buy them from the professionals. I will not buy any, myself. I just disagree with the idea. I understand why you can’t just video tape the whole show, and requesting no flash photography, but no snapshots? Sure, if a professional photographer takes an absolutely beautiful picture and it’s a must have, I’d pay for it. But I disagree with being forced to buy them. Besides, I’m a performer. I have plenty of pictures of me performing, many of which have been for free or for trade.

On another note, when I read the description of the event and the hotel on the website, I was under the impression the hotel was within walking distance of the event hall. It was not. So, if you plan on attending Spirit, plan to carpool or rent a car.

The most fun I had at the event was hanging out with my troupe. There was a lot of bonding and a trip to the beach. It was great fun. And I was so happy to get to take a dip in an oil-free part of the ocean. I love beach frolicking!

You are currently reading Spirit of the Tribes 10! at JadeDancer.com.